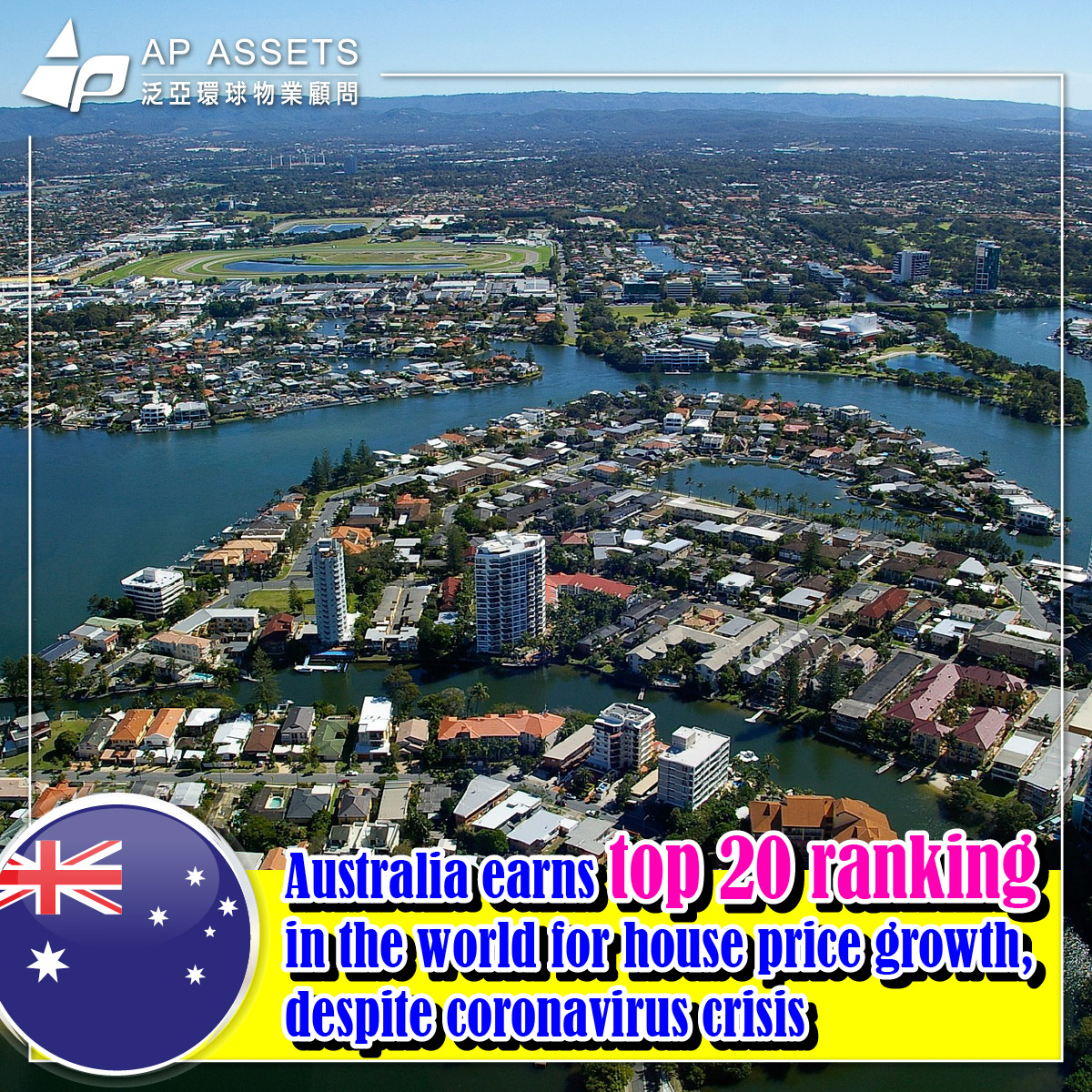 Australia’s property market is still ranked in the top 20 in the world, despite any damage inflicted on it by the coronavirus pandemic.

Out of 56 countries and territories in the global index’s second quarter analysis produced by independent property consultancy and real estate agency Knight Frank, Australia ranked 19th, recording house price growth of 6.1 per cent over the 12 months to June this year.

It’s a massive improvement on last year’s June result, which saw Australia record negative growth of -7.4 per cent, scraping in at last place.

Earlier this year in the March quarter, booming Sydney and Melbourne real estate saw Australia’s housing market skyrocket up the rankings to be placed 10th in the world.

But after price growth dropped by 2 per cent between April and June due to coronavirus-related market shutdowns during those months, Australia slipped down the ranks to land on 19th place by the end of the June quarter.

According to Knight Frank’s head of residential research Australia Michelle Ciesielski, it’s likely the ranking will fall further, with Melbourne’s property prices expected to take a hit as the local market remains closed through the usually busy spring auction season.

Ms Ciesielski said the pandemic had not only impacted on property price growth, but also the amount of data that could be collected, with only 29 of the 56 countries reporting results during the second quarter of 2020.

“Despite this, the data still offers a glimpse into the impact of COVID-19, with a number of countries and territories seeing a decline in prices increasing again,” Ms Ciesielski said.

Turkey ranked number one, with house prices up 25.7 per cent since the second quarter last year. Luxembourg, up 13.9 per cent and Lithuania, which rose 12.4 per cent, made up the top three house price rankings.

Australia’s closest neighbour New Zealand was ranked 11th, after a rise of 9.1 per cent in house prices over the year, making it the best performer in the Asia Pacific.

However New Zealand’s quarterly result reflected the impact its stage four lockdown had on property, with house prices falling over the three months to the end of June by 4.1 per cent.

Ms Ciesielski said Australia’s property market had fared better than some because the lockdowns during the second quarter were not as long or severe as those in other countries.

“It can also be attributable to the state of the housing market prior to the pandemic, with Australia’s market strong heading into 2020 with demand high and stock levels low,” she said.

This could hold the Australian market in good stead for a recovery next year when all capital cities were out of lockdown and open borders, she said.

“Across the globe we’ve seen mixed results from countries coming out of lockdown,” Ms Ciesielski said.

“A key factor for property growth has been the strength of the market going into the pandemic, so with strong underlying fundamentals there is likely a better chance of speedier return to growth mode.”

“We’re likely to experience an upward price trajectory for Australian mainstream houses in the second half of 2021,” she said.

Knight Frank’s national head of residential Shayne Harris said Australia’s local housing market had seen continued demand from buyers throughout the COVID-19 crisis, however there were fewer transactions due to vendors choosing to “wait and see” how the pandemic played out.

“In Sydney the market continues to be underpinned by a severe shortage of stock for sale by both auction and private treaty,” Mr Harris said.

He blamed difficulties obtaining finance for fewer registered bidders at auctions across the harbour city, although the clearance rates were staying steady.

“In Melbourne, market conditions have been in steady decline for the past four months, with volumes and prices heading gradually south, although there was a very slight uptick in August,” Mr Harris said.

“The city’s second lockdown, combined with reliance on overseas immigration and education to support the market, could see these conditions continue beyond the other capital cities that are ahead of the curve in relation to recovery.”

Mr Harris said Brisbane was enjoying a quicker recovery than expected with tighter apartment supplies helping keep prices buoyant and placing the city in the best position in 2021 and beyond.

“Coming off an extended period of low price growth, Brisbane’s affordability is the best capital city, side by side with Perth in the short to medium term,” he said.